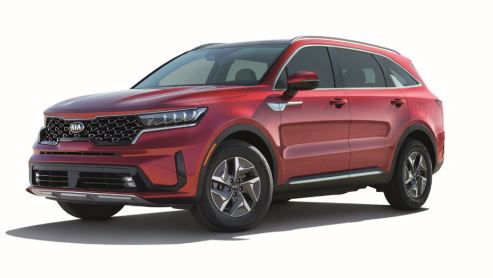 The Kia Sorento is one of Kia's most popular crossover SUV offerings, and it looks attractive in head-to-head comparisons with other options. The car has satisfied customers for over 20 years. In newer models, amenities and creature comforts abound. The fourth-generation models are also attractive and stately, making Kia look more like a luxury manufacturer. The Kia Sorento is worth considering if you are in the market for an able commuter or road tripper. Whether you want a vehicle that capitalizes on space, performance, safety, or a host of other features, you should come to check out the Kia Sorento at Dennis Eakin Kia in Killeen, TX.

The 2022 Kia Sorento is the newest model in the fourth generation of this compact crossover option. This generation debuted in 2020, and it features larger models than prior generations. The wheelbase is longer, and the length of the car is too. For the 2022 Kia Sorento, you have various trim options:

The plug-in-hybrid versions are new for 2022 and exclusive to upper-tier trims. They use the same engine and transmission as the other hybrid option but come in all-wheel drive. The standard hybrid Sorento makes 227 horsepower and comes with front-wheel drive.

The basic setup consists of a gas-powered 191-horsepower four-cylinder, and you can option a 281-horsepower turbo-four. Either gas-only model uses an eight-speed transmission, while the two hybrids use a six-speed.

The hybrid Sorento is the most fuel-efficient, while plug-in variants can conserve fuel by relying solely on battery power. The other options are also respectable for such a sizable car.

Despite its efficiency and compact size, the 2022 Kia Sorento is an able hauler. It seats six to seven people comfortably in a whopping 144 cubic feet of passenger space. You also get a nice amount of storage in the cargo area, which can fold for improved figures. In front of you, you get a digital gauge screen and infotainment touchscreen system for streaming music and GPS from your smartphone. The Kia Sorento also looks attractive with its sleek steering wheel and rhombus air vents. The other great thing about the Kia Sorento is it can come ready to tow up to 3,500 pounds.

Beyond convenience, style, and performance, the 2022 Sorento is also safe. The 2022 Kia Sorento comes standard with both lane departure and forward-collision warnings, as well as automatic emergency brakes and rear-cross traffic alerts. While the National Highway Traffic Safety Administration has yet to release scores for the 2022 model, other fourth-gen Sorento SUVs earned top safety ratings. You can feel good behind the wheel of a Sorento as you drive the streets of Killeen, TX.

History of the Kia Sorento

The Kia Sorento debuted in 2002 as a truck-based SUV. However, through the years, the model evolved into the compact crossover it is today. The 2009 model marked the start of the second-gen Sorento and marked Kia's first time manufacturing in the United States. It also brought a complete style change, from boxy to rounded. The third generation made its appearance in 2014. This model cemented the Sorento as a popular vehicle. The fourth-generation brought the Sorento into the future by introducing hybrid options and more safety features than ever before. The Kia Sorento has always evoked performance and safety. No matter which model you are in, you get an understanding of why this vehicle has persisted.

To check out the Kia Sorento in person, visit us at Dennis Eakin Kia in Killeen, TX. We have plenty of options from which to choose, and they come at affordable rates. You will be happy to take advantage of our low prices, and our finance team will help you find a payment plan that suits your budget. Test drive the Kia Sorento and compare it to other options at Dennis Eakin Kia in Killeen, TX.